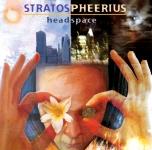 As one can infer from the front cover, the band I am about to describe is really unique as for both genre, techniques used and arrangements. I beg forgiveness in sackcloth and ashes because I neglected attention to their previous works, which means I don’t have a touchstone from the past, but hey…there are so many bands around and too many releases. One lifetime couldn’t be enough even if one dedicated their whole free time to music, and I am one who’s very close to that goal actually!

Anyway, the opener “New Material” begins deceiving you by making you think Stratospheerius are in the vein of Red Hot Chili Peppers, but then the electric violin and track plot bring towards T-Ride and the likes. Excellent are the bass lines by the way.

“Old Ghosts” is a danceable groovy Rock that has some percussions and hooks that have connections to Santana. The amplified guitar and the violin are the protagonists here and they are perfectly in tune; after all, when the guitar didn’t exist yet, the fiddle was already notorious because of rumors about musicians such as Italian Tartini’s and Niccolò Paganini’s; the latter, perhaps because of his otherworldly skill, had devilish tales swirl around him. In fact, he was rumored to:

Due to the superstitions surrounding him, and the fact that he didn’t receive last rights before death, permission to bury his body in consecrated ground was withheld until five years after his death, after an official inquiry could be made into his orthodoxy, and his son could give a generous ‘donation’ to the church. Moreover the Evil One, as agent of death and creator of dance, became linked to the violin during the Renaissance period, as depicted by paintings such as Pieter Brueghel’s “The Triumph of Death” and Hendrik Goltzius’s “Couple Playing, with Death Behind“. These introductory statements are necessary as every song is made particular by the acoustic or the electric violin, and this is especially valid for “Sold out“; like all string instruments it is more difficult to play than a piano for instance, because you need more precision but this major effort is repaid by the infinite nuances you can achieve; the solo is therefore vital and this one is – without exaggeration – awesome, since it is played in a guitaristic manner.

Coordinates vary completely with the record highlight, “Today Is Tomorrow“, reminding of Genesis in the vocals and Incubus (USA) when the distorted guitar bursts into; the utmost care was delivered to the guitar licks and the bass windings along with the moog psychedelic inserts make it suitable as a single, whereas “Mental Floss” and “Gutterpunk Blues” are perfect candidates for modern Western flick soundtracks; there’re wah-wah, John Zorn, psychedelia, acoustic guitar, guitar shredding and everything is skillfully performed. Each member is a master of their instrument and the emotive links between the 4 members is real considerable. 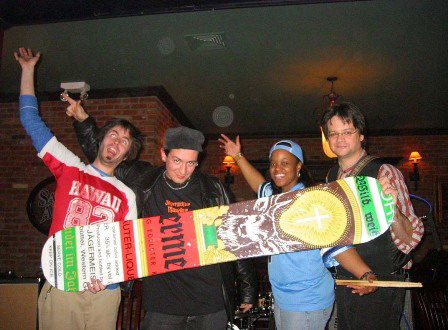 The elegance of the cover “Driven to Tears“, originally composed by the Police, melts with the fat bass sinuosity, while the frantic and surgical drum work is closer to a gardener’s chisel; decidedly moving are the lyrics, surpassing the other ones that Sting’s band wrote as for their mordant; such topics are still topical, altho the song is about 25 years old.

Multiformity is guaranteed by New Jersey’s musicians but at the same there’s always a link with the full length as a whole; that’s why “Yulia” is no exception, even tho it deal with Jazz Rock in a fairly free and romanticist way, whereas “Long Rd.” manages to combine Funky rock with a fairly melancholic violin. It may sound like a heresy impossible to realize but Joe Deninzon and his pack made it real!

In conclusion, “Heavy Shtettle Part II: Heavier Shtettle” is the only composition written by four hands together with Mr. Alex Skolnick; curb your headbanging, because it is heavy, especially the final part in crescendo, but it is not Heavy metal and it is based on Middle-East percussions and rhythms; another masterpiece indeed!

One more thing to stress out is the excellent recording giving great attention to detail, which is vital to albums like this.

After all it turned out to be a positive thing that a band of this kind has come out these times; I fear that if they’d started in the 80’s they would have been understood by too few people, while now the public is more mature in all. Surely in the 70’s there was more place for avantgarde artists and labels were not as oppressive and market-oriented as nowadays’, yet it seems unlikely that some major would have signed them, as they are too forward with their minds! About the 90’s enough has been said and the decline of music sales and the excess of releases, so I will limit myself to claim that today’s tighter competition has been a timely useful spur to the four-piece. 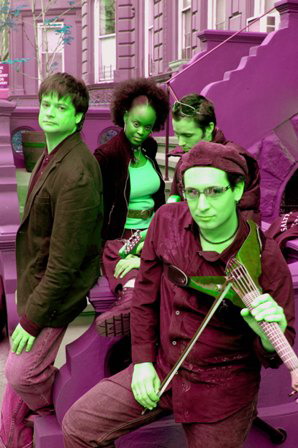 The violin has never been made so topical like now, and most of the time its notes stay far from nostalgia or melancholy, the way bands such as My Dying Bride have accustomed us. Were they still alive, my country-fellows Vivaldi and virtuosist Paganini would be crying for joy, but also more recent violinists such as Stravinskij, Prokofiev and Sciostakovic would like to attend a Rock gig of the quartet, no shit!

If you have an open mind, tastes that range from Frank Zappa, Mahavishnu Orchestra, Dave Matthews, Radiohead, Jeff Beck, Bela Fleck and Blues Traveler and are in search of something different, go for this record; for once the band’s name doesn’t exaggerate and is up to the expectations created. No, you won’t get bored even after a century by these 10 tracks, my word!

It’s familiar, but like absolutely nothing you’ve heard before. That’s about all this reviewer can muster as a lead for reviewing the latest Stratospheerius release, Headspace. Led by electric violinist/vocalist/mandolinist and former Clevelander Joe Deninzon, the quartet unleashes their fourth full-length effort with an assortment of songs that simply careen from your speakers. Following up their critically-acclaimed Live Wires disc, Headspace contains a frenzied mélange of alt-bluegrass, progressive rock, jazz fusion and funkabilly, with shades of the neo-hippie 90s and space rock for good measure. If Bela Fleck and Frank Zappa had a love child in outer space, it might grow up to sound like these guys do.

Band leader Deninzon brings it from the word go, channeling every bit of voracity through his 6 and 7-string Viper electric violin. No joke, he pushes bandmates Mack Price (guitars, vocals) Bob Bowen (electric and acoustic bass) and Lucianna Padmore (drums) into the stratosphere. You know their name is fitting after the set opener “New Material,” which pinballs through an array of time signatures and chord progressions that stop on a dime. In contrast, “Old Ghosts,” “Today is Tommorrow,” and the manic “Gutterpunk Blues” go for a bigger, louder and faster Jam Band ethos. Pay particular attention to the inimitable cover of The Police classic “Driven to Tears” and the set closer, “Heavy Shtettle II,” which you simply have to hear yourself to believe. Even I’m a bit lost for words about it. Memorable hooks, gravity-defying instrumental prowess and a kitchen sink move toward rock and Zappa-esque fusion fill Headspace. Let it fill yours.

There’s so much going on on this CD that it could merit an “Indie Round-Up” column all on its own. Stratospheerius’s music can’t be pegged to one genre, but neither is it a simple hybrid of a couple of styles. For that reason, it’s exciting stuff.

Jazz fusion, Stingpop, progressive rock, classical strains, and jam-band spaceouts take turns running through the ten songs on this, the band’s fourth album. Leader Joe Deninzon’s devilish violin weaves the compositions together, and he lends his throaty vocals to some of the tunes, layering attractive melodies over odd time signatures and dynamic, unpredictable arrangements. Think of a much more adventurous version of the Dave Matthews Band, add Steely Dan precision and prog-rock inventiveness, and you’ll get an inkling. There’s also a Police influence that would be quite evident even without the revved-up cover of “Driven to Tears.” The crack musicians deserve mention individually: drummer Luciana Padmore, bassist Bob Bowen, and guitarist Mack Price.

These songs really do sidestep genre, yet one foot remains in accessible pop territory. “New Material” opens with a Celtic jam that flames into a lightspeed funk-rocker. The song is a funny take on creative inspiration and writer’s block: “I need a death threat deadline panic attack/I need a big bolt of lightning to strike me in the ass/Where’s my material/I need new material.” “Mental Floss” is an exciting odd-time instrumental jam, while “Gutterpunk Blues” begins with a delicate-punk (a new term I just made up) mandolin solo (Deninzon again) which leads into crashing heavy-metal riffage and then devolves into wild electric guitar and drum soloing. The jazz fusion elements come to the fore in the slower instrumental “Yulia,” while the pumped-up klezmer of “Heavy Shtettle Part II: Heavier Shtettle” closes the CD with a blast of technical prowess and ear-candy fun.

An interesting and spirited journey into outrageous creativity, this CD is highly recommended for anyone with an adventurous ear, including fans of fusion, progressive rock, the Police, the Kronos Quartet’s pop experiments and collaborations, and fiery fiddling. Sample the music at the Stratospheerius website and their Myspace page, and read a good interview with Joe Deninzon.

Jon Sobel reviews music and theater on a regular basis for Blogcritics, and occasionally comments on politics, world affairs, and life in New York City. He is also a computer professional, musician, and small-time concert promoter in New York City. (His band, Whisperado, can be criticized at will.)

Hailed as champions of “psychojazz trip funk,” Stratospheerius leap deep into progdom withHeadspace — a smart and satsifying album in which a mandolin-powered instrumental called “Gutterpunk Blues” can straddle a frantic, spot-on cover of The Police’s “Driven to Tears,” and a Jewish heavy metal anthem (“Heavy Shtettle Part II: Heavier Shtettle”) and a solid, fiddle-fueled rocker about a songwriter pissed off because he can’t write a song (“New Material”) book-end a collection of 10 equally fascinating pieces.

Fronted by electric violinist (and guitarist, singer and mandolin man) Joe Deninzon, Stratospheerius veers more heavily from its instrumental past into vocal-based music influenced as much by Bruce Springsteen and Joni Mitchell as Frank Zappa and Bela Fleck, Kansas and The Flower Kings. Hence, these songs tell stories that, coupled with some intense instrumentation that the quartet makes sound way too easy, emerge as substantial pieces of ear candy. And the three instrumentals here improve significantly upon the band’s earlier work.

Despite the unusual shredding (mandolin rules, dude!) and virtuoso aspirations inherent in this music, Headspace resonates with an earthbound freshness that reflects a charming change of direction for a band that’s already established itself as critical darling. The possibilities just became seemingly endless.