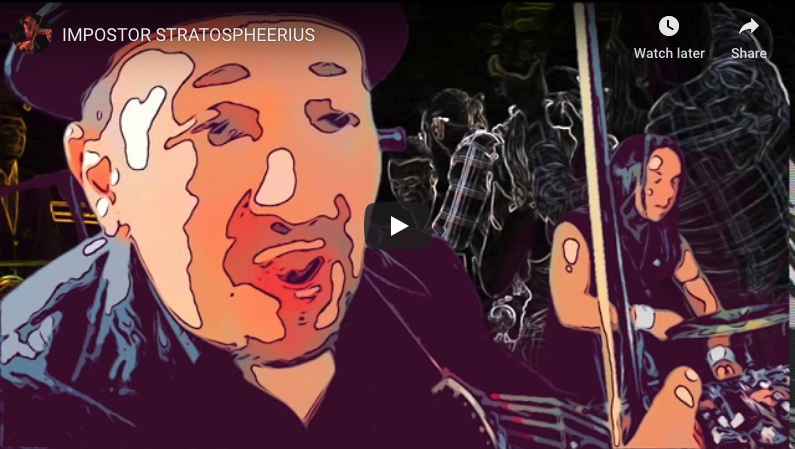 4-Star Review of “Guilty of Innocence” by Progression Magazine

Critics Rave about “Guilty of Innocence!”

With herky-jerky momentum, the sinister yet jolly “Behind the Curtain” kicks o Joe Den-inzon & Stratospheerius’ exhilarating fifth album Guilty of Innocence. Chunky guitars, a battery of drums, and a seesawing Jacob’s lad- der of electric violin battle for supremacy as Deninzon’s piercing tenor equates American exceptionalism with the fraudulent Wizard of Oz. e metaphor has been employed before, but seldom with such panache.

Deninzon has been called the Jimi Hen- drix of electric violin, and that comparison seems apt on “Dream Diary Cadenza,” an excerpt of Deninzon’s solo concerto, where his violin swoops, howls, and dive bombs amid quickening arpeggios.

Elsewhere, Deninzon nods to Jean-Luc Ponty and George Clinton’s Funkadelic while charting an eccentric course that conjoins whiplash funk, spacey electronic, and pro- gressive rock. Vocals adopt a snarky tone, but the lyrics convey anything but cynicism. Deninzon is a moralist raising an alarm and pointing out insanity.

Splashy and theatrical, Guilty of Innocence is a howl for justice delivered by virtuosos completely in synch with one another. It’s a darkly comic clarion call to combat a u- enza, self-delusion, and the commoditiza- tion of daily life. Otherwise, Deninzon seems to say, we’re just another brick in the mall.

“When you put distorted guitars up against a violin you get magic. When you put a violin solo in a metal song, you get Fucking amazing shit! I love it when artists push the boundaries of what is perceived as the norm….. And I love it even more when it’s pure magic… I tip my hat and bow my head in awe ..”-Act/one Magazine. Read full review HERE

“Stratospheerius music is otherworldly!”They can tear out ear hairs and stomp them flat!…sounding both ahead of the curve and accessible at the same time. ”-#cirdecsongs. (www.proglodytes.com) Read full review HERE

“Guilty of Innocence is not only great, but one of the most hectic and heart-stopping albums I’ve listened to.-Zachary Nathanson
MUSIC FROM THE OTHER SIDE OF THE ROOM

“Deninzon’s perfect vocal delivery and skills as a violinist. Stratospheerius is as tight as ever and really create a strong organic melody. Bravo! This is music!”
–Warlock Asylum International News

The Next World review from thecornernews.com 9/12 by Wildman Steve

Joe Deninzon is a Russian violinist born to two members of that country’s leading Philharmonic Orchestra. He’s been labeled “The Jimi Hendrix of the Violin” by many, due to his extreme virtuosity on the seven-string electric violin. That’s right—seven strings. His style throughout his career has blended jazz, rock and gypsy music in ways no other could possibly imagine. He’s performed with an amazing array of musicians, including Sheryl Crow, Bruce Springsteen, Phoebe Snow, Everclear, Ritchie Blackmore, Smokey Robinson and Les Paul, just to name a few. He’s also performed as a solo electric violinist with the New York Ballet.

Deninzon leads the band Stratospheerius, who’ve just released their fifth album, “The Next World,” on Steve Vai’s Digital Nations label, and once again shows the world that Russians and Americans can make beautiful and exciting music together. Actually, exciting is too tame a word for this album, as it opens with the astounding “Release,” a smoking progressive rocker that will suck you into this album like an industrial vacuum. What follows is a thrilling array of songs that run the gamut from complex prog tunes to simple ballads, from Zappa-esque epics to alluring soundscapes. Deninzon’s acuity on the violin is multi-faceted and consistently over-the-top amazing, and always deeply musical.

You’ll hear nods to influences like Jean-Luc Ponty, Jerry Goodman, and Dixie Dregs’ Allen Sloane, but through it all Deninzon presents a unique personality and perspective on the violin. “The Next World” is an electrifying album, guaranteed to take you into the stratosphere and beyond.

The Next World review by Mike Popke for www.seaoftranquility.com

STRATOSPHEERIUS: THE NEXT WORLD
REVIEW BY MICHAEL POPKE ON WWW.SEAOFTRANQUILITY.COM

The fact that in-demand electric violinist Joe Deninzon has performed with everyone from Bruce Springsteen and Ritchie Blackmore to Johnny Mathis and Smokey Robinson suggests that his band Stratospheerius has broad appeal. And does it ever!
This New Jersey-based outfit’s distinct hybrid of progressive rock, jam band, funk, jazz and Gypsy influences turns Stratospheerius’ latest album, The Next World…, into a formidable musical beast. The disc opens with “Release,” a track that evokes Kansas’ savvy use of violin, borrows a reggae-pop beat and boasts an elegant vocal arrangement akin to Spock’s Beard. The Yes influence begins showing up in “The Missing Link,” the manic “Tech Support” bounces along like something Umphrey’s McGee could have written, “Climbing” has a late-summer country-rock groove that would work on mainstream radio, and “The House Always Wins” is a sparse blues ditty.
Lyrically, Stratospheerius is just as adventurous, with Deninzon’s chameleon voice shifting on each song, not so much dominating these tunes as inhabiting them. And a trio of instrumentals — two wild ones (“Road Rage” and “Fleshbot”) and the mellowest track on the album (“Ballad for Ding Bang”) — showcases Deninzon’s prowess while not slighting his talent-rich band: guitarist Aurelien Budynek, bassist Jamie Bishop and drummer Lucianna Padmore.
Every Deninzon and Stratospheerius album is worthy of your attention, but if you’re new to these guys, start here. And if you’re not — well, you know you want this…
Track Listing:  1) Release  2) The Missing Link  3) Tech Support  4) Climbing  5) Fleshbot  6) The House Always Wins  7) Gods  8) Ballad for Ding Bang  9) Road Rage  10) One Foot in the Next World  11) The Prism
Added: August 29th 2012 Reviewer: Michael Popke Score:  Related Link: Official Stratospheerius Website Hits: 159 Language: english